Eagles rookie cornerback was just carted off the field 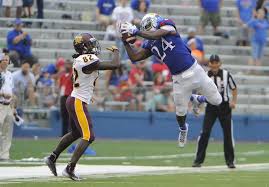 Jacorey Shepherd went down with an injury

JaCorey Shepherd was considered the replacement for Brandon Boykin, whom the team traded to the Steelers last week, but that might not happen now. Shepherd was just carted off the field according to multiple news sources in Philly.

Zach Berman    @ZBerm
JaCorey Shepherd injured on a collision with Darren Sproles. Gets carted off from the sideline

Jimmy Kempski    @JimmyKempski
Darren Sproles just lit up JaCorey Shepherd on a running play. Shepherd was down for a minute or so. Was just helped off.

Jeff McLane    @Jeff_McLane
Rookie CB JaCorey Shepherd just fell to the ground. Down and being attended to by trainers. #Eagles

The Eagles may be in the market of a cornerback now if the injury is serious.