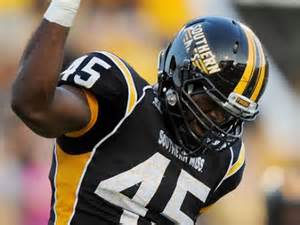 Dasman McCullum has been signed by the Philadelphia Eagles

The Philadelphia Eagles have signed former Southern Mississippi pass rusher Dasman McCullum. The Eagles signed rookie linebacker Dasman McCullum on Tuesday morning. To make room for him on the roster, the team waived/injured Jordan Dewalt-Ondijo, who suffered an ankle injury. The addition of McCullum fills out the team’s 90-man roster ahead of Saturday’s preseason game against Baltimore.

McCullum, who had previously signed with Washington as an undrafted free agent, played for Southern Miss throughout his collegiate career. Standing at 6-4, 242 pounds, McCullum played in all 24 games over the course of his final two years as a defensive lineman, becoming a permanent starter in his senior season. In his final year with the Golden Eagles, the 23-year-old recorded 61 tackles, 38 of which were solo, and forced four fumbles. He also recorded an interception, was credited with a pass breakup and blocked a kick. As a junior, he notched 10.5 tackles for a loss of 50 yards, which was a team high for the season.