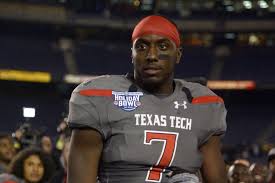 Dallas Cowboys re-signed their former draft pick Will Smith today. Smith was drafted in the seventh round (238th overall) of the 2014 NFL Draft by the Dallas Cowboys. He was waived on August 29 and signed to the practice squad. He was released to make room for defensive end Michael Sam on September 3. He was re-signed to the practice squad on October 29.

mike fisher    @fishsports
#Cowboys add another LB, signing Will Smith (Texas Tech) – drafted by Dallas in 7th round of the 2014 NFL Draft. @1053thefan

On May 14, 2015, he was released after rookie minicamp to make room for tryout linebacker Donnie Baggs.

Smith played his college ball at Texas Tech, and lined up next to Terrance Bullitt. Bullitt was viewed as the better linebacker but suffered an injury during the draft process.