Colts head coach wants Robert Mathis to slow down; It is a long season 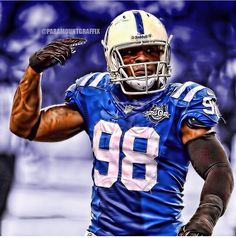 Yesterday the Indianapolis Colts placed Robert Mathis on the PUP list, but the 34 year old veteran wants to get back on the field. There were reports yesterday, that Mathis was flying up and down the sidelines working trying to show the media that he is close.  Well his coach told him Sunday he needs to slow down.

Mathis is just two years removed from a 19.5 sack season, he’s acting like a rookie again. The team wants him to return to form, but coach Pagano wants him to realize the season is long.