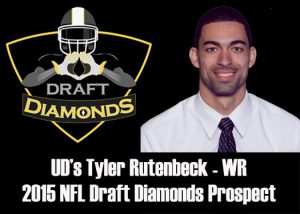 Tyler Rutenbeck has signed a deal with the Indianapolis Colts

The Indianapolis Colts have switched out a few wide receivers on the bottom of their roster. The team waived Wide Out Tyler Rutenbeck and signed wide receiver L.T. Smith.

Rutenbeck is a 6-2, 186 pound wideout who was initially signed by the Washington Redskins as an undrafted free agent shortly after the draft, though he was released not too long after that.  In four seasons at Dubuque, Rutenbeck totaled 163 catches for 2,715 yards and 42 touchdowns, averaging 16.7 yards per reception.  In 2014, Rutenbeck caught 66 passes for 918 arid and 11 scores, while in 2013 he caught 68 passes for 1,269 yards and 22 touchdowns (most in Division III).

Smith is a 6’0 wide out from Akron.  Smith played in 48 games at Akron and recorded 117 receptions for 1,426 yards and nine touchdowns. He started 34 total games and began his collegiate career at safety and recorded 41 tackles (23 solo), 1.5 tackles for loss, 1.0 sack, one pass defensed and one fumble recovery. In 2014, Smith started 12 games. He had 45 receptions for 489 yards and three touchdowns.