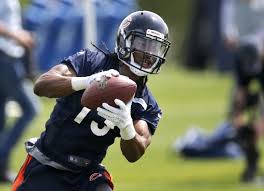 Before the NFL Draft, Kevin White the former West Virginia wide out talked a lot of trash about what he was going to do in his NFL career, and so far all he has backed up is being on an NFL roster.  The former WVU wide out has been injured for 6 weeks so far according to John Fox his head coach.  White is suffering from a shin injury.

Fox says Kevin White is “making headway” but still vague about any timetable. Said he was on the shelf for 6 weeks.

You can still have a huge season still after coming off an injury, we learned that with Odell Beckham Jr., but White definitely is missing crucial time with his quarterback.