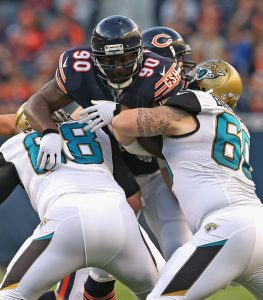 The NFL announced Monday that Bears DT Jeremiah Ratliff has been suspended the first three games for violating Policy and Program for Substances of Abuse.

This suspension stems from a DWI plea following a car crash that occurred back in January of 2013. Even so, this is a tough loss for the Bears’ defense, given that Ratliff was listed as the team’s starting nose tackle on their depth.

Ratliff, 33, played college football for Auburn University, and was drafted by the Dallas Cowboys in the seventh round of the 2005 NFL Draft. Ratliff was selected to four straight Pro Bowls, from 2008 to 2011.