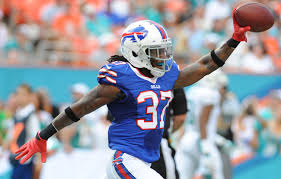 The Buffalo Bills announced that they’ve signed CB Nickell Robey to a contract extension on Sunday via their twitter account.

Buffalo Bills    @buffalobills
Locked down. CB Nickell Robey has signed a contract extension with the Bills!

Robey, 23, wound up signing on with the Bills as an undrafted free agent out of USC back in April of 2013. He was entering the final year of his three-year, $1.485 million rookie contract and will make a base salary of $585,000 for the 2015 season. The Bills general manager loves what he can do.

“Nickell Robey has been a productive and dependable cornerback for our team since we signed him in 2013,” said Bills General Manager Doug Whaley. “I commend our scouting staff for identifying and signing a player of Nickell’s caliber in the undrafted college free agent period. Since entering the NFL, Nickell has worked hard and taken advantage of his opportunities to make plays when called upon.”

“It feels great,” said Robey of securing his NFL future with the Bills. “I just feel extremely blessed right now. I just kept my faith in the Buffalo Bills organization and they believe in me and see the talent that I have. We got on common ground and now I’m here for another few years and now I can just play football.”

Robey, 23, has been the team’s primary nickel cornerback since his rookie season when he burst onto the scene as an undrafted rookie and seized the role.