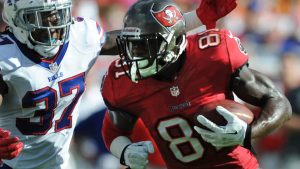 Buccaneers have traded Tim Wright to the Detroit Lions

Ian Rapoport of NFL Media reports that the Buccaneers are trading TE Tim Wright to the Lions. Wright has been traded twice now by the Buccaneers. Last year the Buccaneers landed offensive lineman Logan Mankins in exchange for Wright, and this year they claimed him without cost because they had the worst record.

Ian Rapoport (@RapSheet)
16 mins ago
The #Bucs are trading Tim Wright to the #Lions, source said. Detroit gets a pass-catching TE.

This marks the second time in the past two years that the Buccaneers have traded Wright to a team in need of tight end help.

Tampa Bay wound up claiming Wright off of waivers from the Patriots back in June, so his return to the Bucs was obviously short lived.