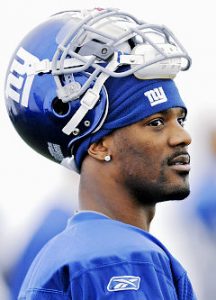 Aaron Ross the former Giant is now a Cleveland Brown

The Cleveland Browns announced the signing of DB Aaron Ross and LB Everette Brown on Sunday.

Brown is a 6-2, 263-pound veteran in his seventh NFL season out of Florida State. Originally selected by the Panthers in the second round in 2009, Brown has appeared in 44 career games with the Panthers, Chargers, Cowboys and Redskins. He has totaled 63 tackles, seven sacks, three passes defensed, four forced fumbles and one interception. Last season, he appeared in six games with the Redskins. A native of Stantonsburg, N.C., Brown graduated from Beddingfield High School.

Ross is a 6-0, 197-pound veteran in his eighth NFL season out of Texas. Originally selected by the Giants in the first round in 2007, Ross has appeared in 83 career games with the Giants and Jaguars. He has totaled 250 tackles, 41 passes defensed, 11 interceptions and 2.5 sacks. He helped the Giants to Super Bowl victories in 2007 and 2011. As a member of the Ravens, he missed all of all season with an Achilles injury. A native of Tyler, Texas, Ross graduated from John Tyler High School.