Browns quarterback Connor Shaw will require surgery on his thumb 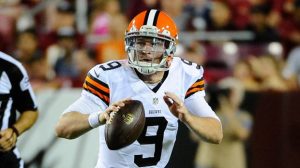 Cleveland Browns QB Connor Shaw sustained an injury to his thumb that will require surgery.  Shaw completed 5 of 10 passes for 64 yards in the contest. He is expected to miss an extended period of time.

“I feel for Connor because he has worked extremely hard,” said Browns head coach Mike Pettine. “He’s a competitor and has had a great offseason and a good camp so far. He is good for the quarterback room and it’s unfortunate that this injury won’t allow him to compete.”

This is a big blow for the Browns, but he is considered their third string quarterback. This means Johnny Manziel will need to stand out.