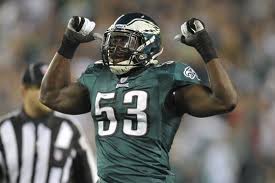 Aaron Wilson of the National Football Post reports that the Browns worked out and signed LB Moise Fokou to a contract on Monday.

Fokou, 29, is a former seventh-round pick of the Eagles back in 2009. He spent three years in Philadelphia before brief stints with the Colts, Titans, and Saints.

On August 2, 2012, Fokou and Greg Lloyd were traded to the Indianapolis Colts for Kevin Thomas and a conditional seventh round pick in the 2013 NFL Draft.