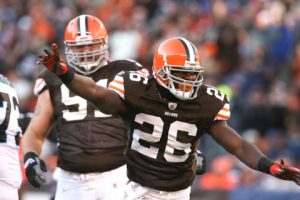 Justin Gilbert was drafted eighth overall in last year’s draft but he is struggling passing Pierre Desir the small school cornerback from Lindenwood who was drafted 127th overall. The defensive back’s coach was asked today why Pierre was taking first team reps over Justin Gilbert and he said because Desir earned it.

“Why was Pierre out there first today?” secondary coach Jeff Hafley said after practice. “Because he earned it, and that’s how we’re going to be in the room. Whoever earns it is going to be who goes out [there first] whether it’s with the twos, if Tramon takes a day off, it’s with the ones. That could change tomorrow. It could’ve changed halfway through practice. But when you create competition, you got to be fair, and whoever earns it is going to be the next guy in. And Pierre earned it today, so today he got the nod.”

On Sunday, Desir intercepted a pass from quarterback Johnny Manziel when undrafted rookie receiver Darius Jennings let up while running a route during a one-on-one drill, according to the Akron Beacon Journal.

“When he came [here], he was extremely raw fundamentally,” Hafley said. “He’s so much quicker, faster, his technique is so much better and then his knowledge of the game ­— he’s starting to understand things. … He’s put in the work. He’s got a chance. He’s done a really good job so far, but it’s early.”