Brian Hoyer has been named starting quarterback for the Texans 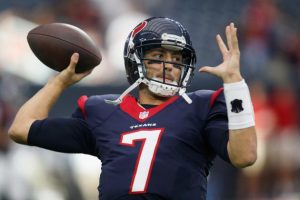 Ryan Mallett falls short of taking the job from Brian Hoyer. According to Ian Rapoport of NFL Media Insiders, Brian Hoyer has been named the starting quarterback for the Houston Texans.

Mallett was given the start this week against the Broncos and lost 14-10 at NRG Stadium. He finished with a 75.3 passer rating, making an unconvincing argument to overtake Hoyer.

Mallett completed 5-of-7 passes, but only had 23 passing yards with a long completion of 10 yards during the first half. He averaged just 3.3 yards per passing attempt.

While Brian Hoyer was not much better, he was named the starting quarterback likely due to his experience.