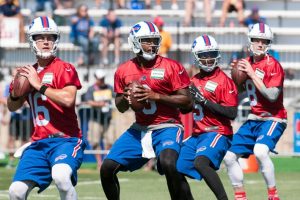 All four quarterbacks are getting the same treatment in Buffalo

Not many coaches would ever do this, but Rex Ryan understands that the quarterbacks are the leader of a team. He has never been in a situation where he had four guys that are all pretty solid.  So what did Rex Ryan do this week?

Rex Ryan named all four of his quarterbacks his captains this week, for the third preseason game.

Rex Ryan will not name his starting quarterback for week one, but let’s just say this much it is working. All of them are slinging the rock. All led the Bills down the field and scored points. While none are big names, if Rex Ryan can get consistent play from the Bills they could be a team to watch out for.