Bernard Pollard hates Tom Brady, but does not like the decision to suspend him 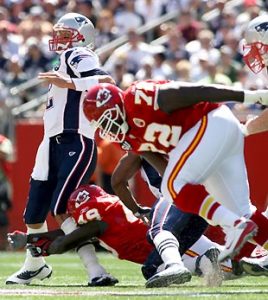 Bernard Pollard is one of the hardest hitters in the NFL, but he cannot stand Tom Brady

Bernard Pollard was deemed the Patriots killer because of his hard hits which caused several Patriots players to be placed on the injured reserve including Tom Brady, but he is not happy with the recent suspension of Brady, even though he dislikes him as a player.

“I do not like Tom Brady as a competitor, somebody that’s playing against him because he is a competitive player. I respect the piss out of him because the guy knows how to win. The guy, you can say whatever you want about him, but he is a true champion,” Pollard said on SiriusXM NFL Radio.

Pollard does not feel the four game suspension is fair.

“Do I feel that he should be suspended four games? I’m going to tell you, no,” he said. “This dude is a competitor, man. I don’t think he should’ve been suspended for four games. But I’m not the commissioner, I’m not on that committee that suspended him, and I know he’s going to fight tooth and nail like he does on the field to get back on the field with his team.”