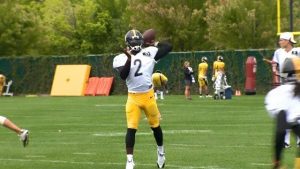 Steelers have signed Mike Vick and they are taking quite a bit of backlash for the signing.  Last week they had several fans outside Heinz Field protesting the signing of Vick and now the team is taking more heat. Animal Rescue League, has pulled an October event from Heinz Field because it doesn’t want to have any connection to Vick, who was convicted of a felony for his involvement in a dog fighting ring.

“While we understand that Mr. Vick has made an effort to atone for his past mistakes and has worked to help strengthen animal abuse laws, we do not believe that it is appropriate for him to continue a high-profile and influential public career,” the organization said, via the Pittsburgh Post-Gazette. “Our hope is that the very public discourse taking place across Steeler Nation this week raises awareness of the brutality and inhumanity of dog fighting. With increased community knowledge of the issue, we can all play a role in helping to end dog fighting once and for all.”

This is pretty sad, because people deserve a second chance. The guy made a mistake and did his time for the incident.  Let it GO people….