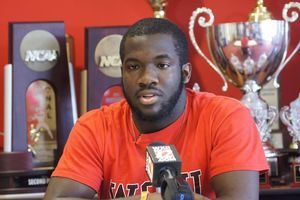 WSSU freshman Kenny Sharpe says he doesn’t feel like a Hero, BUT HE IS

Saving a boy from a burning car, sounds pretty heroic to me. The Winston Salem Police department agree with me, and this week called Kenny Sharpe a redshirt freshman football player a Hero. Well in an interview with the Winston Salem Journal, he says he is not a hero.

“I don’t feel like a hero,” Sharpe said about pulling a 13-year-old boy from the wreckage of a two-car accident that left two dead on Friday night. “I just think it was God putting me in that position to see how I’d react. I believe I acted in the right way.”

On Friday night around 9:30 in Warren County, Sharpe and his girlfriend, Brittany Whitaker, came upon a two-car accident where one of the cars was on fire. When Sharpe stopped and jumped out of his car, he noticed somebody near the burning car.

“I heard somebody say there’s a body over there, and I went to see him and he was very close to the flames,” Sharpe said. “So I just called to him and told him to crawl and then I dragged him away and carried him to my car.”

Benjamin Rodwell, 13, was pulled away from the wreckage by an alert Sharpe, and then Sharpe and his girlfriend rushed Rodwell to Halifax Regional Medical Center in Roanoke Rapids. Doing the driving was Whitaker, a sophomore at WSSU.

“I took everything out of the backseat, and Kenny and Ben were in the back and I told Kenny to keep Ben talking and awake,” Whitaker said by telephone Monday from her home in Durham. “So Kenny was talking to him and asking a lot of questions and that helped because if he became unconscious then that could be fatal.”

I think Kenny Sharpe is a Hero, it is not easy to do what he did. While God may have sent him, he should be considered a Hero by the people in the community. We are so quick to talk about a player doing something wrong, but we don’t talk about the kids doing right. Kenny you are the MVP of Today!!!!