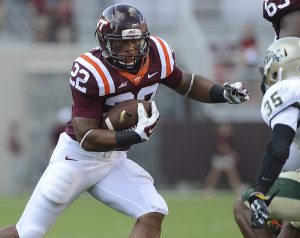 Virginia Tech suspended RB Shai McKenzie after he was arrested for having sex with a minor.  The 19 year old running back was busted back in February, but the judge issued his sentence this week.

McKenzie will have to serve 50 hours of community service as well as 15 days in jail which is expected to begin on July 17 as indicated by a report from WDBJ-TV.

McKenzie was also charged with contributing to the delinquency of a minor but the charge was not prosecuted.

Virginia Tech HC Frank Beamer indefinitely suspended McKenzie when the charges became public back in March. His status with the team has not changed, as indicated by a Virginia Tech spokesperson. McKenzie, 19, and another Virginia Tech student were detained after two girls, ages 14 and 15, said the two had sex with them. The charges stem from an incident in February involving a sexual encounter with underage girls. Investigators found condoms at the home where the encounter took place, according to WDBJ-TV.

Boy college football is getting bad….