United States wouldn’t do anything special for the Marines killed, so Peyton Manning did 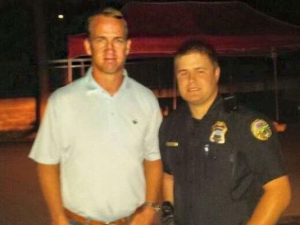 Peyton Manning is amazing, at least he stepped up

A few days ago the United States was attacked on our soil and we lost five soldiers.  The United States Administration did absolutely nothing for the fallen soldiers or their families.  The flags were not flown at half staff for the soldiers.

The White House web site does not record President Obama’s having issued any proclamation to that effect, nor do flag notification sites. And it is true that President Obama issued proclamations ordering the flag of the United States be flown at half-staff following similar events such as the mass shooting at the Sandy Hook Elementary School in Newtown, Connecticut, in December 2012, and the Boston Marathon bombing of April 2013. So I could see how this would upset most Americans, especially when we lose our own troops.  There was one person that was concerned though, besides myself.  That was Broncos quarterback Peyton Manning.

After the attack, Manning, who played collegiately less than two hours north at the University of Tennessee, made his way to the Naval Marine Corps Reserve Center where he visited with service members, first responders and the families of the victims Saturday night, according to WRCB-TV.

This is why he is why I consider him the best quarterback in the NFL.  The man is amazing, and continually does great things for the community.  I applaud you Peyton Manning!!!!