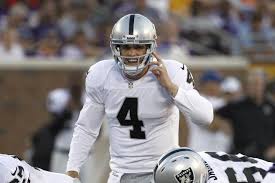 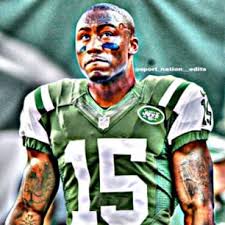 Jets give Brandon Marshall some more money, but could be end up being a bust in NY?

5) Brandon Marshall WR- I think Brandon stats will be decreased this season. I’m not here to say that he will not put up 1000 yards because that will happen. I just feel this season he will be overlooked with a new head coach that wants to run the ball. The Jets have a serious problem at quarterback even worse than the Bears. I know Mr. Cutler can be inconsistent but I don’t see how the Jets get Marshall more balls than he got in Chicago.

4) Derek Carr QB- I like Derek Carr. I really do. But I feel sometimes quarterbacks go into the sophomore slump. Especially in Oakland. I feel that he has a chance to succeed in the long run and be their franchise guy. I just think 21 and 12 won’t happen. I like what Oakland is doing a wide receiver now and at running back but I have to see it to believe it. I want Derek to show me again that he belongs in the next great young group of quarterbacks.

3) Eli Manning QB- I know that Eli usually is known for leading the league in Int’s but he had a surprisingly quiet year with 30 touchdowns and 14 int’s. I know he has Odell and Victor and a big 6’5 TE. But I don’t see how he consistently puts up the Td to interception ratio. I see Eli having closer to 35 and 25 year. Eli can be very streaky at times and I think this year is an off year for the two time Super Bowl champ.

2) Jimmy Graham TE/WR- When I saw Seattle traded for Jimmy Graham, a lot of analysts were crowing them back to represent the NFC. This very well could happen. I want to say one thing, Sean Payton of New Orleans is a mastermind finding ways to get the ball to Graham’s hands. He creates match-ups that are unbelievable. Seattle is known as a run first team and as long as Russel Wilson is their quarterback and Marshawn Lynch is the running back this will continue. The Super Bowl was a clear example of that on the goal line play that changed everything. I will look to the Percy Harvin trade for the outline on this trade. Now I know there two different players but Seattle had a hard time finding a role for him. Jimmy is different, they will find a role and he will be a big part of their run. But I feel that he will not see as many targets as he did in New Orleans. You have to remember the saints are usually behind and pass almost more than anyone so his stats were inflated. He also had Drew Brees throwing him passes. Expect him to do exactly what Seattle wants and flourish. His stats won’t be the same as they were in New Orleans. 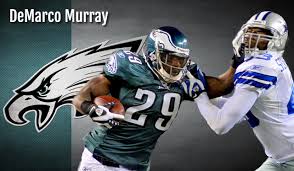 Could D-Murray be a bust for the Eagles?

1) Demarco Murray RB- I put Murray here not because I’m a Cowboys fan but to be an honest fan. Almost 400 carries and 50+ catches leads to a down year. I see him traveling to Philly where he will have the ability to get over 1000 yards, even splitting carries with Ryan Mathews. That is my next point. Demarco will be splitting carries 3 ways. I feel there is no way he matches 1800 yards this season. I see a serious decline in stats but not a decline in play. Expect Murray to have anywhere from 800-1300 yards. I think Lesean Mccoy fit this scheme better than Demarco just my opinion.