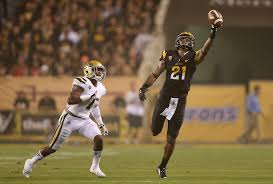 Just a few months ago, Jaelen Strong the Texans rookie wide out was called out by his head coach for showing up overweight and out of shape.  Strong was trying to overcome a hamstring injury, but now he is back and ready to roll. The former Arizona State wide out has dropped several pounds.

That is pretty good amount of weight considering Strong was only 217 pounds at the NFL scouting combine. I would not be surprised to see Strong finish the season strong after sitting behind Cecil Shorts and Nate Washington to start the season.