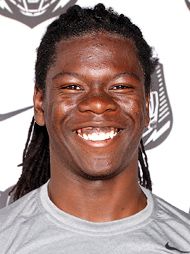 Bomani Bassette-Hairston was the alleged attacker

Miller was the one that had the bones broke in his face for motivating his teammate….WOW

Spartan Central is reporting that incoming freshman defensive back Bomani Bassette-Hairston of Oakland was involved in an incident that sent redshirt freshman safety Chad Miller to the hospital.

Miller, in a tweet that has since been deleted, said he was released from the hospital Tuesday night and suffered three fractures near his eye. He wrote that a teammate “hit me in my face with his skateboard when I wasn’t looking” and refuted the characterization that they were involved in a fight.

Chad said he was just trying to motivate incoming freshmen to finish their reps during an afternoon workout, but one of them allegedly took offense with his tone and attacked him later that night at his dormitory on campus.

Doctors say he’ll make a full recovery and will be back on the field in a month.

Bomani Bassette-Hairston has been dismissed from the team, and an investigation is ongoing.