Since 1993 only 4 WR’s who were Franchised, signed a deal before the season started 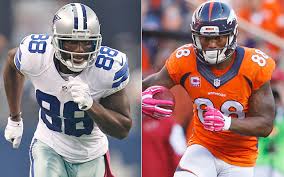 Will either one of these guys land a long term deal before the start of the season?

Both Dez Bryant and Demaryius Thomas were hoping to land long term deals before the season started, but the odds are not in their favor. According to ESPN, since 1993, 13 wide receivers received the franchise tag, but only 4 were signed to contract extensions before the start of the season.

NFL on ESPN    @ESPNNFL
From 1993 to 2014, 13 WRs were placed on the franchise tag and only 4 signed extensions before the season opener.

Both Dez Bryant and Demaryius Thomas could be sitting out a while. It does not sound like this is something that happens very often.  Right now the ball is in the players court. I personally would work out a deal.