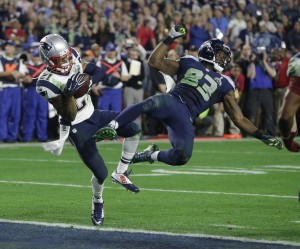 Seattle Seahawks wide receiver Ricardo Lockette says he cannot watch the Super Bowl play in which Malcolm Butler picked off a Russell Wilson pass at the one yard line.

“I see that ball coming, man. I’ll never stop seeing it,” he wrote. “The next thing I know, I’m on the turf on my knees. I’m looking around like, Okay, it’s incomplete? I look across to the Patriots’ sideline, and I see Tom Brady jumping up and down. And then I look across to our sideline and I see our guys with this blank look, with their heads dropped.