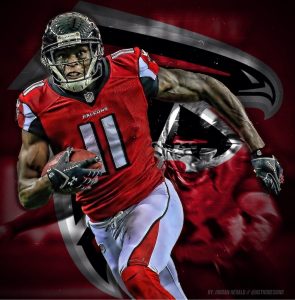 Roddy White the Falcons long time stand out wide receiver is the veteran wide out for the Falcons but he told Josina Anderson this week the Falcons need to get his teammate Julio Jones under contract. He feels the Falcons are only hurting themselves by waiting.

“If I was the GM, I would get a deal done with Julio now,” White told ESPN’s Josina Anderson on Friday. “I want to make sure he’s paid. That’s my guy.”

“The more they wait, the more it’s going to cost them,” White said. “It’s important that (Julio) feels comfortable.”

The Falcons owe Julio Jones $10.176 million this year, and let’s face it Jones is a top-five receiving talent and worth every penny handed to Bryant and Thomas. Right now Calvin Johnson is making 16 million a year and no receiver will top that amount. So the Falcons would be smart to give Julio what he deserves.  That is not as big of a roster adjustment as many believe, so we agree with Roddy.