Report: Falcons have the most interest in Supplemental Draft entrant Isaiah Battle 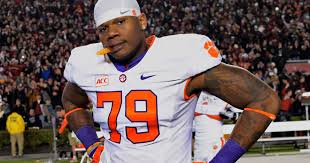 Yesterday, the NFL announced they would hold the Supplemental Draft on July 9th, 2015.  The Supplemental Draft has four players currently enrolled and the big name to watch is Isaiah Battle the former Clemson starting offensive tackle. According to a report from NJ.com, the Atlanta Falcons have the most interest in Isaiah Battle the Clemson University offensive lineman.

“I’ll be surprised if he’s not taken,” said a personnel executive for a NFC team, who added he hears Atlanta is the most interested. “He’s worth a shot, for sure. It’s just a matter of how much is he worth to you.”

“He’s got good range, moves well for a big man,” an AFC scout said. “He just needs to get stronger, both in the upper body and lower body. You watch his games last year and he was a lot better at the end of the season than he was at the beginning. There’s some upside there.

“Now, if you’re looking for a guy to come in and start right away, I don’t know that. But if you’re OK with him for a year, maybe two, you might have something really good.’

I think Battle will be selected in the Supplemental Draft, but where is the question. I would use a pick on him and groom him into a player for me, he has great size and length.