Redskins give LB Ryan Kerrigan a multi year extension worth 11.5 million a year 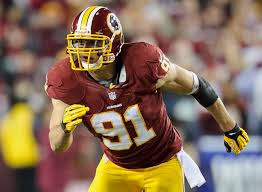 Ryan Kerrigan of the Washington Redksins was given a pretty penny

According to Albert Breer, Kerrigan will make $32.78 million over the first three years of the contract.