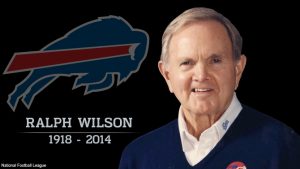 Ralph Wilson Jr. was one of the most generous owners in NFL history. When Al Davis and the Oakland Raiders were on a downward spiral, it was Wilson Jr. the owner of the Bills who bailed him out with a 400,000 dollar loan.  Now the former Bills owner is back at it again.  This time he will not be alive to see the outcome.  Ralph Wilson Jr. passed away, and sold his team to Kim and Terry Pegula.  Ralph’s foundation is now working to help the communities of both Buffalo and his hometown Detroit.

The foundation named “healthy lifestyles, early childhood and youth development, caregivers, community development and economic growth” as their top priorities and earmarked $60 million in grants for 2015.

“Ralph saw firsthand the impact of his generosity in his lifetime,” Wilson’s widow Mary said in a statement. “Always thinking of others even in his own legacy, his hope with this trust was that the Foundation’s work may make a direct impact in the lifetimes of those who knew him best.”

What an awesome owner. RIP RALPH