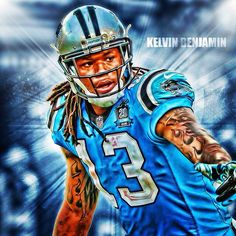 Second year wide receiver Kelvin Benjamin missed 10 off-season practices this year already because of a nagging hamstring. His coach Ron Rivera took a shot at Benjamin questioning his weight. Saying that the extra weight he had could be the problem to the hamstring injuries.  Well Benjamin kind of politely took a shot back at coach, when he was asked about his weight.

Benjamin, who played at 245 pounds as a rookie, said he’s at a “perfect” weight right now and that his hamstrings have healed.

“I’m not on the scale,” he said, according to ESPN.com. “But I’m playing weight.”

Benjamin was a stud last year, and I expect him to have an even bigger year in 2016, especially with Devin Funchess on the opposite side of him.