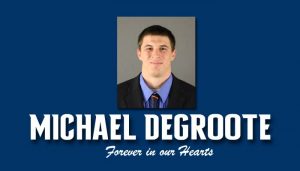 Northern Arizona senior football player Michael DeGroote died after apparently shooting himself with a gun while vacationing with his family in Alaska. The family is adamant that the shooting was accidental.

The 22-year-old DeGroote died Tuesday at a campground at Denali National Park and Preserve. Park spokeswoman Kathleen Kelly says an investigation is underway to try to determine if the shooting was accidental or deliberate, but adds the answer may never be known.

Please keep the family of DeGroote in your prayers. This was the release from NAU:

“The entire NAU Athletics Family is deeply saddened by the loss of Michael,” NAU coach Jerome Souers said in a statement. “He was a well-respected young man that I was proud to have as a part of our program. Our time with Michael was cut short, but he will always be a Lumberjack. Our thoughts and prayers go out to his family.”