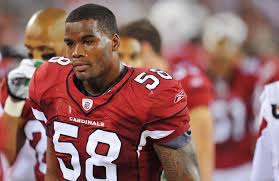 Daryl Washington still has not applied for reinstatement according to NFL officials.

The Arizona Cardinals linebacker has been suspended for a violation of the league’s substance-abuse policy for more than a year now, but nothing has changed in his status as of now. It has been a while since he was at the forefront of any NFL discussion, even though he’s a former Pro Bowler on one of the NFL’s better teams.

Washington is eligible to apply for reinstatement because a year has passed, but there hasn’t been a sign he has applied. Well today Mike Jurecki says there is no change in his status, basically meaning he has not applied for reinstatement yet.

Mike Jurecki    @mikejurecki
According to NFL Spokesman [email protected] regarding Daryl Washington “There is no change in his status and we have nothing further to report.”