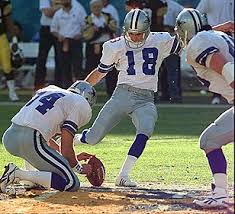 Alexandria legend Chris Boniol is returning to his stomping grounds

Chris Boniol is a Louisiana native and now the former Dallas Cowboys kicker is returning home to coach. Louisiana College is a private institution of higher education located in Pineville, in the central portion of the U.S. state of Louisiana. Affiliated with the Louisiana Baptist Convention, it serves approximately 1,300 students.

Boniol is from Alexandria, Louisiana, which is about five miles down the road from Pineville. In the NFL, Boniol played for the Dallas Cowboys from 1994 to 1996, the Philadelphia Eagles from 1997 to 1998, and the Chicago Bears in 1999. In 1996, he tied the NFL record for most field goals in a game with seven. He is currently serving as the assistant Special Teams coordinator for the Oakland Raiders, after having previously served in that capacity with the Cowboys.