Look who is friends…. Yes that is Trent Williams and Richard Sherman 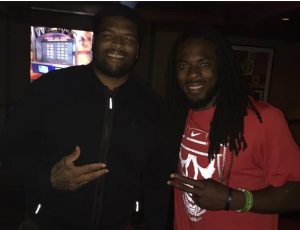 Do you remember when Washington Redskins offensive tackle Trent Williams smushed the face of Richard Sherman after their football game in 2013?

Well the two hated one another, Sherman said it was a dirty move.

“It was just a dirty move by Trent Williams,” Sherman said after that game. “I can understand why he’s frustrated; it’s the end of their season. They played a solid game. Just a cheap shot.”

But Williams took responsibility for the high emotions.

“Just high emotions, man, and you know, I let them get the best of me,” Williams said then. “It’s nobody’s fault but mine.”

Richard Sherman had forgiven Williams, writing on Twitter that he “received a very classy text” from the tackle about a month after the incident, but now the two are spending time together.

“Great weekend at the @Nike opening and kicking it with @RSherman_25,”Williams wrote. “Great dude. No people we’re not beefing lol.”