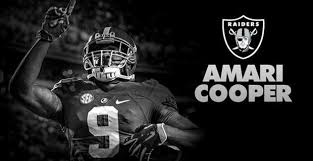 Amari Cooper of the Raiders has the highest Madden Rating

Jerry Rice is one of the best wide receivers to ever play the game, and while talking to CSN California, Rice gave their rookie Amari Cooper a huge compliment. He compared Cooper to Tim Brown, saying that the Raiders have their new Tim Brown. Brown was a legend for the Raiders after getting drafted in 1988 by the team.

“They have their new Tim Brown,” Rice told the Raiders’ web site, via CSN California.

He added: “I think with Cooper, he’s very much like Tim Brown. Very explosive, got speed to burn.”

Tim Brown played college football for Notre Dame, where he won the Heisman Trophy, becoming the first wide receiver to win the award. He spent sixteen years with the Los Angeles/Oakland Raiders, during which he established himself as one of the NFL’s most prolific wide receivers. His success with the Raiders organization earned him the nickname Mr. Raider. Brown has also played for the Tampa Bay Buccaneers. So I hope Mr. Cooper understands what that means.