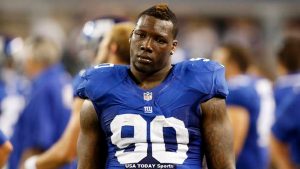 The New York Giants will not offer Jason Pierre Paul their star pass rusher a new deal after they pulled a sixty million dollar deal off the table from him.  Pierre Paul has no one but himself to blame for the contract situation, after he blew off his finger playing with fire works.

Pierre Paul was slapped with a franchise tag, in which he still has not signed that tender.  Before the day started five players were hoping to land long term deals, and it sounded like it would be impossible for 2 of them to work out a deal.  Well out of the five, four of the Franchised players signed long term deals. The only one not to get a contract offer was Jason Pierre Paul.

I hope this teaches everyone an important lesson, Don’t play with fireworks before the biggest contract of your life…..