In 1998, the Colts wanted to hire Nick Saban to coach Peyton Manning 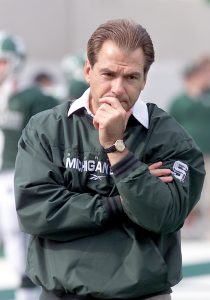 Nick Saban’s biography has been pretty interesting to say the least. The book written by Monte Burke, has had some great pieces of information. In 1998, when the Colts were looking to find a new coach for their team to lead Peyton Manning, the team was planning on hiring Alabama’s head coach Nick Saban, replace Lindy Infante.

Polian met with Saban, who at the time was coaching Michigan State, and Polian liked what he heard from Saban.

“I was prepared to offer him the job,” Polian told Burke.