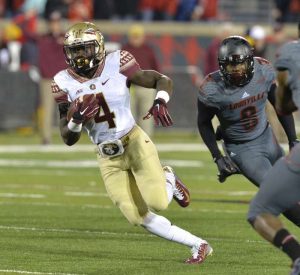 Dalvin Cook’s attorney says he did not hit any woman

Dalvin Cook’s attorney Ricky Patel, told ESPN that the FSU running back did not punch a woman in the face several times outside a bar in Tallahassee, Fla., last month, as has been alleged. Cook was charged on Friday with misdemeanor battery and has been suspended indefinitely from the team.

“Dalvin Cook did not strike this woman,” Patel said. “Players were leaving the scene at the same time. But Dalvin walked away before it got out of hand.”

Witnesses to the alleged battery were intoxicated and one alleged witness was not present, according to Patel. The attorney also said there is no video of the alleged incident, and that the accuser struck FSU receiver Travis Rudolph.

“We are not interested in a plea,” Patel said. “It’s just not right here. It must be dropped or he must be found not guilty. If necessary, we will file civil charges after these false allegations.”