Four free agents were suspended by the NFL 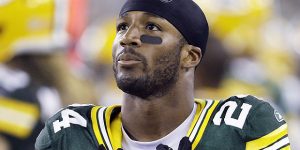 Four NFL free agents were suspended by the NFL today according to Howard Balzer of the SportsXchange.  The most notable is cornerback Jarrett Bush, who played 15 games for the Green Bay Packers last season. Bush became an unrestricted free agent in March, but the 31-year-old has not found a new team.

Bush was suspended by the NFL for the first four games of the 2015 season. He was arrested, but not charged, following an incident outside a Vacaville, Calif., restaurant/bar in early March.

Cornerback Loucheiz Purifoy was also suspended by the NFL for the first 10 weeks of the 2015 season, most likely for violating the substance abuse policy.Purifoy had signed with the Colts as an undrafted free agent last year after a college career at Florida marked by legal issues and off-field concerns.

Finally, running back Quentin Hines was suspended by the NFL for the first week of the 2015 season.

Hines was signed by the New England Patriots as an undrafted free agent in 2013, but spent the season on reserve/injured after suffering a torn labrum during rookie mini-camp. He was waived by the Patriots on March 10, 2014, with the designation failed physical, and hasn’t signed with another team since.