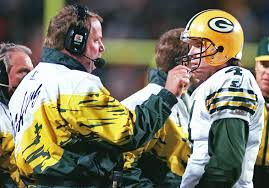 Mike Holmgren and Brett Favre seemed to hate one another on the field, but they are really close

Many thought Former Packers coach Mike Holmgren and Brett Favre was a “Love/Hate” relationship, but what they did not know is Holmgren really loved Favre.  A matter of fact, Holmgren said Favre was like the son he never had.

“People think that we didn’t get along very well and that I was probably too hard on him,” Holmgren said during his speech at Favre’s Packers Hall of Fame induction and number retirement. “At times, I was.

“But the reason I was, I recognized how talented he was and what he could do. I wasn’t right about everything, but I was right about that. And I knew it was my job, I was hired to harness that energy and to teach him, team him the offense and help him be a better player.”

“I’ve had the privilege to coach some great quarterbacks in my career,” he said. “I’ve been fortunate that way. But I have to tell you he was like the son I never had….”

After a pause, he continued: “I’ve never forgotten our time together and tonight I’d just like to say congratulations and thank you.”

“Over the years, I’ve had the privilege of coaching this young man, and then competing against him, and then most recently, we probably talk once a year: ‘Happy birthday, how’s the family?’” Holmgren said. “But it’s special. Every single time, it’s special. Because I believe I know him better now than I did when I was coaching him, and I’m very proud of everything he’s accomplished.”

This is a great relationship, and I am happy Favre was able to finally get what he deserves in Green Bay.