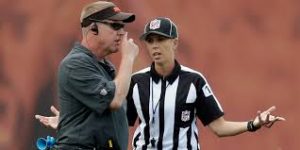 Should Sarah Thomas be booed by the fans when she makes a mistake?

Amy Trask was an executive for the Oakland Raiders from 1997 to 2013, and now the former executive wrote a true message for MMQB.com in regards to equality. Trask wrote that the true measure of equality will come when Thomas is badgered and hounded the way every other official in the NFL is.

So football fans, I have a question.  Is she just being a hater or does she have a point?  Let us know on Twitter @DraftDiamonds