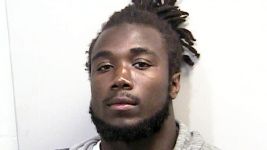 Florida State running back Dalvin Cook has been charged with misdemeanor battery after allegedly punching a 21-year-old woman in the face several times during an argument outside a bar last month.

Florida State issued a statement Friday afternoon saying Cook, a 19-year-old sophomore from Miami, has been suspended from the program indefinitely.

Cook, who was named a “Mr. Football” in Florida as a senior at Miami Central High School in 2013, was FSU’s leading rusher last season, gaining 1,008 yards with eight touchdowns. He ran for a career-high 177 yards with one touchdown in FSU’s 37-35 victory over Georgia Tech in the ACC championship game.

This is huge news considering he is the second Florida State player to be arrested for hitting a woman in the past two weeks.