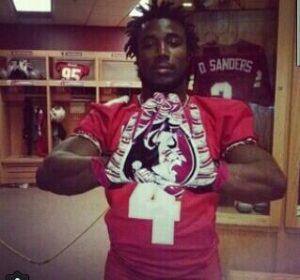 Dalvin Cook has been in trouble with the law in the past as well.

Seminoles running back Dalvin Cook was recently charged with misdemeanor battery for allegedly punching a woman in the face outside a bar in Tallahassee, Fla., last month,but according to NFL.com, it is not the first time Cook has been in trouble at Florida State.

Cook was cited last year by Tallahassee Animal Services for improper care of three pit bull puppies who were found tethered by a heavy chain, Sports Illustrated reported on Sunday. The puppies were unable to move and some of them were choking, according to the citation report. Cook was also charged with criminal mischief in 2014 as part of a group of FSU players involved in an alleged BB-gun incident that caused some property damage. As well, the Orlando Sentinel obtained records from the Florida Department of Law Enforcement that show Cook was charged with robbery in 2009 and with possessing and firing a weapon at an event on school property in 2010, a third-degree felony. Charges were dropped or abandoned in both cases.

The Seminoles back has obvious red flags right now, but will NFL teams be able to look beyond his incidents?