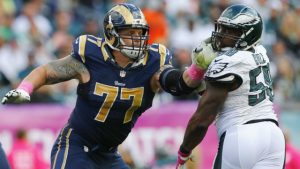 Jake Long is on his second free agent visit today. This is with the Atlanta Falcons

Offensive tackle Jake Long who is currently a free agent, is working out for the Atlanta Falcons today. He played college football at Michigan, where he was a two-time consensus All-American, and was drafted by the Miami Dolphins first overall in the 2008 NFL Draft. He has also played for the St. Louis Rams.

Chris Mortensen    @mortreport
Jake Long is in Atlanta for physical and a workout with @AtlantaFalcons. He’s a free agent after 2nd ACL surgery with Rams in 2014

The Falcons are hurting at the offensive tackle position and if Long is healthy he would be a steal for the Falcons.  Long is a very solid offensive tackle when healthy, the problem is he has been banged up every year since entering the NFL.