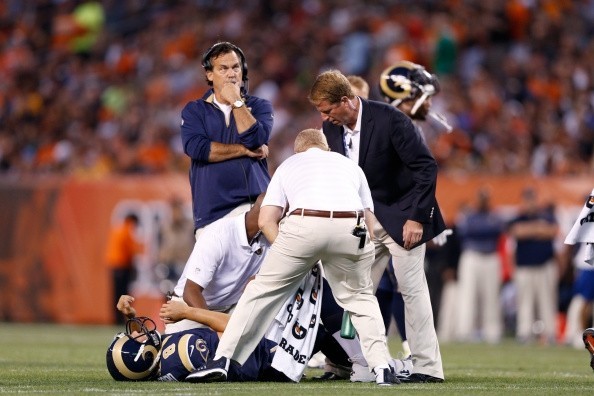 Eagles are confident that Sam Bradford will be healthy.

Chip Kelly and the Philadelphia Eagles are comfortable with Sam Bradford as their future quarterback. A matter of fact Chip sat down with reporters and talked about Bradford and the extensive research the team did on Bradford’s body.

“We looked at everything, and we knew we weren’t going to pick No. 1 or No. 2. So, and I’ve said it before, if you’re not going to pick one or two, how do you go get a quarterback?” said Kelly, explaining the thought process heading into this offseason. “Peyton Manning switched teams because of an injury. Drew Brees switched teams because of an injury. So we went down that path.”

When it came to Bradford, the Eagles doctors consulted with the St. Louis trainers and the those that performed the surgery. The word they received was that the 27-year-old, coming off the second tear of his left ACL in less than a year’s time, “was fine” and “was progressing.” Further, there was no cartilage issues in the knee. On both occasions, it was just the ACL that was damaged. The Eagles did their own independent research as well and reached the conclusion that when it comes to ACLs, there is a 10-to-12 percent chance of re-injury, according to PhillyMag.com

“So that’s an 88-to-90 percent chance that they’re going to be successful,” said Kelly.

That is pretty impressive, so the team could be ready to roll with Bradford. If nothing happens to him this year, they will likely be willing to give him a pretty penny.