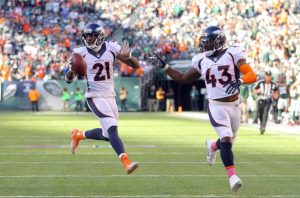 Broncos secondary feel like they have been slapped in the face

The Denver Broncos secondary is upset and are speaking out after they failed to make the top 100 list by their peers.  Aqib Talib and TJ Ward fell all the way off the list, while Chris Harris (who rated as the best cornerback in the NFL) according to Pro Football Focus, was an omission. T.J. Ward told the Denver Post he was upset about the list.

“I was talking to (Aqib) Talib about the upcoming season and how they left all three of us off the top 100, so we have a little chip on our shoulders,” safety T.J. Ward told the Denver Post Monday from his foundation’s celebrity golf tournament. “We didn’t appreciate that. And that’s from our peers. If you grade out No. 1 by Pro Football Focus and you’re all-pro,” Talib said, “you definitely had to be one of the top 100 players.”

According to the players Richard Sherman (No. 11), Darrelle Revis (17), Patrick Peterson (19) Joe Haden (23) and Brent Grimes (38) are the top five corners in the NFL. Talib went as far as calling out some of the players that made the list, saying they made the list because of their name not their play.