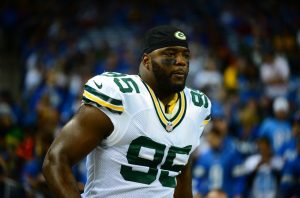 According to Jason Wilde of ESPNWisconsin.com, former UCLA defensive lineman Datone Jones was cited for marijuana possession in Green Bay on January 19, one day after the Packers lost the NFC title game in Seattle, which is why he was suspended for one game by the NFL.

The following month, Jones paid an $880 fine to dismiss the charge. It now gets a lot more expensive, due to the suspension.