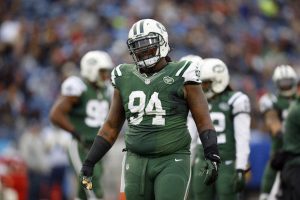 “If you would have asked me after my first year starting about how I am as a player, I would have given you a humble answer. Not too confident but humble,” Harrison told Around The NFL on Tuesday following a training session at Parabolic Performance & Rehabilitation. “But when you ask me now, I feel like I’m the best nose tackle in football. If you look at a nose tackle’s job description, nobody does it better than me and I’m confident in saying that.

“I’ve watched Vince Wilfork my entire life. Dontari Poe, Haloti Ngata even though he moves around.Paul Soliai, I watch everyone because you can always take something from someone. But it’s my time now.”

The Jets nose tackle is playing this season under a $2.356 million restricted free agent tender, will demand huge money next year. For example, Vince Wilfork signed a two-year deal with the Houston Texans worth $9 million. More than half the money was guaranteed. What will Harrison demand?

Harrison is slimmed down now, but the former small school standout is ready to attack under Todd Bowles system.