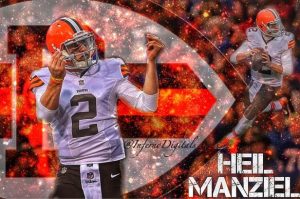 Can Johnny Manziel turn the corner in 2016? I know the Browns fans are hoping he can

Can Johnny Manziel mature? Can Johnny Manziel become the future quarterback of the Cleveland Browns? Those are the questions that Cleveland Browns fans want to know, but you have to be  happy with the maturity of Manziel lately.  According to Nate Ulrich of the Akron Beacon Journal, Manziel worked out with former Buccaneers and Raiders head coach Jon Gruden this week in Tampa.

Gruden is an analyst for ESPN’s Monday Night Football, and part of his pre-draft work includes working with quarterbacks on the show Gruden’s QB Camp.

Manziel’s is obviously trying to fix his image and his play after a nasty first year. Shortly after the season, Manziel spent 10 weeks at a treatment facility. He has moved his residence and been much less of a public presence on social media.