Broncos have offered a huge contract to Demaryius Thomas; Will he accept? 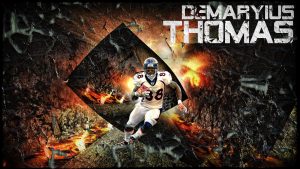 Demaryius Thomas has a huge offer on the table, will he accept it?

The contract deadline for the Franchise tag is less than 48 hours from now, and the Denver Broncos and Demaryius Thomas’ agent, Todd France, have recently exchanged proposals, according to Mike Klis of W9 News in Denver.

The Broncos’ offer is well north of Mike Wallace’ deal, according to Klis. Minnesota’s Wallace is currently the league’s second-highest paid receiver with a five-year deal that averages $12 million a year and includes $30 million in guarantees.

The highest-paid receiver is Detroit’s Calvin Johnson, who is making better than $16.2 million a year. Contrary to reports, Thomas is not seeking Calvin Johnson money. Thomas is seeking a deal that is greater than Johnson’s contract, according to sources.

Should Demaryius Thomas accept the deal? I think he would be a fool not too. We all know that Calvin Johnson is the best wide out in the game. I would accept the offer, but get it as close as I can to Megatron’s deal.